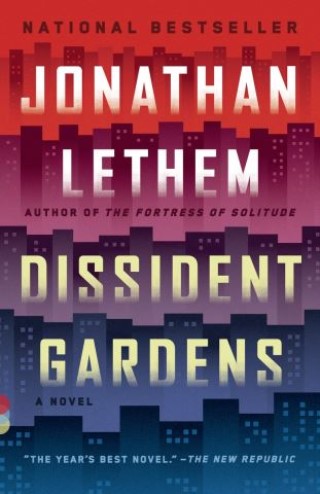 At the center of Jonathan Lethem’s superb new novel stand two extraordinary women: Rose Zimmer, the aptly nicknamed Red Queen of Sunnyside, Queens, is an unreconstructed Communist who savages neighbors, family, and political comrades with the ferocity of her personality and the absolutism of her beliefs. Her precocious and willful daughter, Miriam, equally passionate in her activism, flees Rose’s influence to embrace the dawning counterculture of Greenwich Village.
These women cast spells over the men in their lives: Rose’s aristocratic German Jewish husband, Albert; her cousin, the feckless chess hustler Lenny Angrush; Cicero Lookins, the brilliant son of her black cop lover; Miriam’s (slightly fraudulent) Irish folksinging husband, Tommy Gogan; their bewildered son, Sergius. Flawed and idealistic, Lethem’s characters struggle to inhabit the utopian dream in an America where radicalism is viewed with bemusement, hostility, or indifference.
As the decades pass—from the parlor communism of the ’30s, McCarthyism, the civil rights movement, ragged ’70s communes, the romanticization of the Sandinistas, up to the Occupy movement of the moment—we come to understand through Lethem’s extraordinarily vivid storytelling that the personal may be political, but the political, even more so, is personal.
Lethem’s characters may pursue their fates within History with a capital H, but his novel is—at its mesmerizing, beating heart—about love.

Jonathan Lethem: JONATHAN LETHEM is the New York Times bestselling author of nine novels, including Chronic City, The Fortress of Solitude, and Motherless Brooklyn, and of the nonfiction collection The Ecstasy of Influence, a National Book Critics Circle Award finalist. A recipient of the MacArthur Fellowship and winner of the National Book Critics Circle Award for Fiction, Lethem’s work has appeared in The New Yorker, Harper’s Magazine, Rolling Stone, Esquire, and The New York Times, among other publications.

Jonathan Lethem’s The Ecstasy of Influence, Chronic City, You Don’t Love Me Yet, The Disappointment Artist, Men and Cartoons, The Fortress of Solitude, Motherless Brooklyn, Girl in Landscape, and As She Climbed Across the Table are available in Vintage paperback.