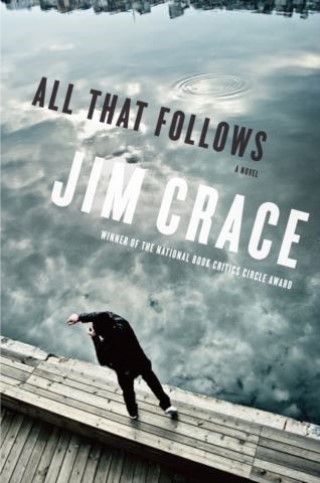 The prodigiously talented Jim Crace has returned with a new novel that explores the complexities of love and violence with a scenario that juxtaposes humor and human aspiration.

British jazzman Leonard Lessing spent a memorable yet unsuccessful few days in Austin, Texas, trying to seduce a woman he fancied. During his stay, he became caught up in her messy life, which included a new lover, a charismatic but carelessly violent man named Maxie.

Eighteen years later, Maxie enters Leonard’s life again, but this time in England, where he is armed and holding hostages. Leonard must decide whether to sit silently by as the standoff unfolds or find the courage to go to the crime scene where he could potentially save lives. The lives of two mothers and two daughters—all strikingly independent and spirited—hang in the balance.

Set in Texas and the suburbs of England, All That Follows is a novel in which tender, unheroic moments triumph over the more strident and aggressive facets of our age.

It also provides moving and surprising insights into the conflict between our private and public lives and redefines heroism in this new century. It is a masterful work from one of Britain’s brightest literary lights.

Jim Crace: JIM CRACE is the author of nine previous novels, including most recently, The Pesthouse. Being Dead was shortlisted for the 1999 Whitbread Fiction Prize and won the U.S. National Book Critics Circle Award for Fiction in 2000. In 1997, Quarantine was named the Whitbread Novel of the Year and was shortlisted for the Booker Prize. Jim Crace has also received the E.M. Forster Award, and the Guardian Fiction Prize. He lives in Birmingham, England.