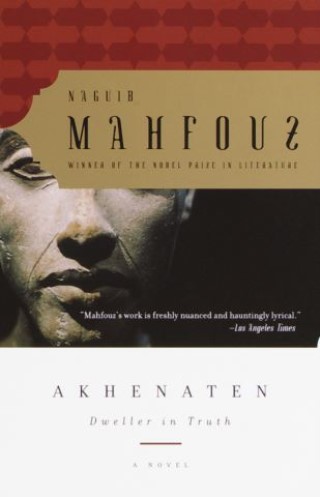 Dweller in Truth A Novel

From the winner of the Nobel Prize for Literature and author of the Cairo Trilogy, comes Akhenaten, a fascinating work of fiction about the most infamous pharaoh of ancient Egypt.

In this beguiling  novel, originally published in Arabic in 1985, Mahfouz tells with extraordinary insight the story of the "heretic pharaoh," or "sun king,"--the first known monotheistic ruler--whose iconoclastic and controversial reign during the 18th Dynasty (1540-1307 B.C.) has uncanny resonance with modern sensibilities.  Narrating the novel is a young man with a passion for the truth, who questions the pharaoh's contemporaries after his horrible death--including Akhenaten's closest friends, his most bitter enemies, and finally his enigmatic wife, Nefertiti--in an effort to discover what really happened in those strange, dark days at Akhenaten's court. As our narrator and each of the subjects he interviews contribute their version of Akhenaten, "the truth" becomes increasingly evanescent.  Akhenaten encompasses all of the contradictions his subjects see in him: at once cruel and empathic, feminine and barbaric, mad and divinely inspired, his character, as Mahfouz imagines him, is eerily modern, and fascinatingly ethereal.  An ambitious and exceptionally lucid and accessible book, Akhenaten is a work only Mahfouz could render so elegantly, so irresistibly.

Naguib Mahfouz was born in Cairo in 1911 and began writing when he was seventeen. His nearly forty novels and hundreds of short stories range from re-imaginings of ancient myths to subtle commentaries on contemporary Egyptian politics and culture. Of his many works, most famous is The Cairo Trilogy, consisting of Palace Walk (1956), Palace of Desire (1957), and Sugar Street (1957), which focuses on a Cairo family through three generations, from 1917 until 1952. In 1988, he was the first writer in Arabic to be awarded the Nobel Prize in Literature. He died in August 2006.