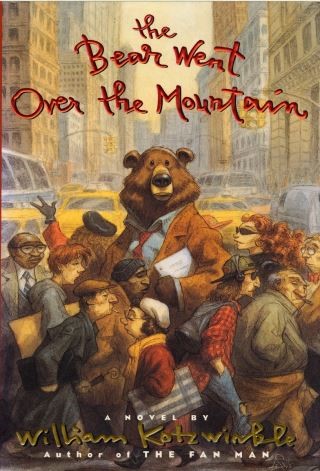 The Bear Went Over the Mountain

Once upon a time in rural Maine, a big black bear found a briefcase under a tree. Hoping for food, he dragged it into the woods, only to find that all it held was the manuscript of a novel. He couldn’t eat it, but he did read it, and decided it wasn’t bad. Borrowing some clothes from a local store, and the name Hal Jam from the labels of his favorite foods he headed to New York to seek his fortune in the literary world.

Then he took America by storm.

The Bear Went Over the Mountain is a riotous, magical romp with the buoyant Hal Jam as he leaves the quiet, nurturing world of nature for the glittering, moneyed world of man. With a pitch-perfect comic voice and an eye for social satire to rival Swift or Wolfe, bestselling author William Kotzwinkle limns Hal’s hilarious journey to New York, Los Angeles, and the great sprawling country in between, where a bear makes good despite his animal instincts, and where money-hungry executives see not a hairy beast with a purloined novel, but a rough-hewn, soulful, media-perfect nature guy who just might be the next Hemingway.

By turns sidesplittingly funny, stingingly ironic, and unexpectedly tender, The Bear Went Over the Mountain captures the zeitgeist of the 1990s dead-on, in a delicious bedtime story for grown-ups.

William Kotzwinkle: William Kotzwinkle is the author of such enduring classics as The Fan Man, Morgana, and E.T.: The Extraterrestrial. His most recent novel, The Game of Thirty, was hailed by Stephen King as “top-level entertainment . . . a suspense novel to rank with the classics of the genre.” Mr. Kotzwinkle lives with  his wife, writer Elizabeth Gundy, on an island off the Maine coast.