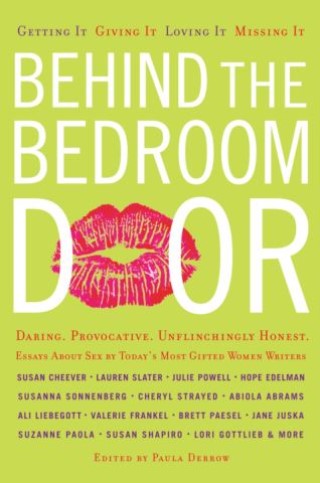 Behind the Bedroom Door

Getting It, Giving It, Loving It, Missing It

We may not admit it, but we’re all curious about what goes on in other people’s bedrooms. After all, we live in a world saturated with sex, which makes it tough not to wonder how we measure up—and even tougher to talk about our intimate experiences honestly. In this frank, poignant collection, twenty-six acclaimed writers go Behind the Bedroom Door and lay bare the messy, mind-blowing, often hilarious encounters that make up a woman’s history.

By sharing their stories, authors like Susan Cheever, Hope Edelman, and Julie Powell bravely open a window on the passions, predilections and problems that we encounter between the sheets. In doing so, they reassure us that whatever we feel, whatever we do or don’t do in the bedroom, we’re not alone.

Telling the truth about sex—how we like it, how often we get it, how it affects us—isn’t easy. This eye-opening anthology tells the truth about women’s intimate lives, shattering some deeply entrenched myths about what goes on in the bedrooms of real women along the way: Susan Cheever upends conventional notions about women, sex, and sentiment in her essay “In Praise of One-Night Stands.”… Sex is the last thing on Lauren Slater’s mind when the bestselling author and psychologist reveals a few surprising truths, even joys, about her virtually sexless marriage in “Overcome.”… Julie Powell serves up a searing chronicle of an illicit affair in “Lost in Space”; and novelist Valerie Frankel takes a decidedly lighter view in “Ouch, You’re Lying on My Hair.”

Whether you’re twenty or seventy, single or perpetually coupled up, these frank, seriously sexy essays provide a deeply illuminating, ultimately comforting no-holds-barred look at our most private selves. Gutsy and provocative, they reveal a great deal about how far we’ve come—and how far we still have to go.

Paula Derrow: Editor Paula Derrow has worked for more than twenty years at a variety of magazines and other media, including Glamour, Harper’s Bazaar, and Lifetime Television. She is the articles director at Self magazine and teaches writing workshops for MediaBistro.com. She lives in New York City.