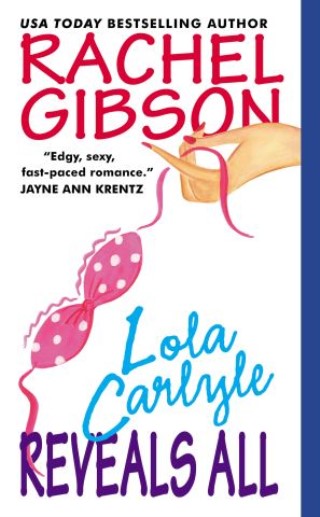 When ex-supermoddel Lola Carlyle learns that some very -- ahem -- private photos of herself are being peddled on the Internet, she hides out where there's sun and -- she thinks -- safety, until the gossip dies out. Then the private yacht she's blissfully napping on is "commandeered" by some man who says his name is Max Zamora, and that he works for the government.

It sounds crazy, but Max is telling the truth -- his cover's been blown, he's on the run, and now he's confronted by a very angry -- and beautiful -- woman. He's seen Lola before -- barely clothed on covers of fashion magazines. But she's more beautiful in person. From the top of her pert blonde head to the tips of her little painted toes, Max finds her sexy, curvy... and a pain in the butt. And that's before she blows up the ship!

Now, the unlikely pair is stranded in the middle of the ocean, it's getting very hot -- not just from the sun -- and Lola is about to reveal it all...

Rachel Gibson began her fiction career at age sixteen, when she ran her car into the side of a hill, retrieved the bumper, and drove to a parking lot, where she strategically scattered the car’s broken glass all about. She told her parents she’d been the victim of a hit-and-run and they believed her. She’s been making up stories ever since, although she gets paid better for them nowadays.