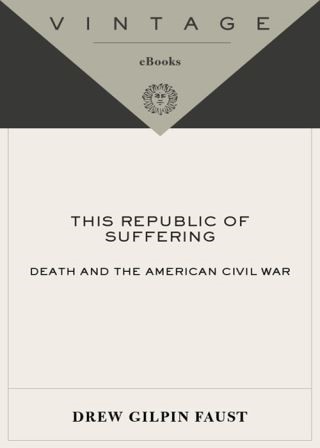 This Republic of Suffering

More than 600,000 soldiers lost their lives in the American Civil War. An equivalent proportion of today's population would be six million. In This Republic of Suffering, Drew Gilpin Faust reveals the ways that death on such a scale changed not only individual lives but the life of the nation, describing how the survivors managed on a practical level and how a deeply religious culture struggled to reconcile the unprecedented carnage with its belief in a benevolent God. Throughout, the voices of soldiers and their families, of statesmen, generals, preachers, poets, surgeons, nurses, northerners and southerners come together to give us a vivid understanding of the Civil War's most fundamental and widely shared reality.

Drew Gilpin Faust is president of Harvard University, where she also holds the Lincoln Professorship in History. Dean of the Radcliffe Institute for Advanced Study from 2001 to 2007, she came to Harvard after twenty-five years on the faculty of the University of Pennsylvania. She is the author of five previous books, including Mothers of Invention: Women of the Slaveholding South in the American Civil War, which won the Francis Parkman Prize and the Avery Craven Prize. She and her husband live in Cambridge, Massachusetts.