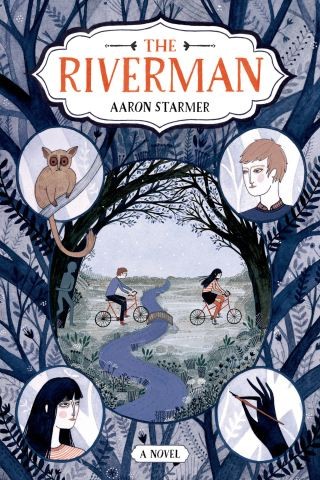 Alistair Cleary is the kid who everyone trusts. Fiona Loomis is not the typical girl next door. Alistair hasn't really thought of her since they were little kids until she shows up at his doorstep with a proposition: she wants him to write her biography. What begins as an odd vanity project gradually turns into a frightening glimpse into the mind of a potentially troubled girl. Fiona says that in her basement, there's a portal that leads to a magical world where a creature called the Riverman is stealing the souls of children. And Fiona's soul could be next. If Fiona really believes what she's saying, Alistair fears she may be crazy. But if it's true, her life could be at risk. In this novel from Aaron Starmer, it's up to Alistair to separate fact from fiction, fantasy from reality.

Aaron Starmer was born in northern California, raised in the suburbs of Syracuse, New York, and educated at Drew University in Madison, New Jersey. His novels for young readers include Dweeb and The Only Ones, and his travel writing has appeared in numerous guidebooks. He lives with his wife in Hoboken, New Jersey.