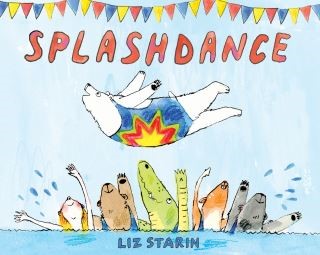 Ursula, a bear, and Ricardo, a human, are preparing for the water ballet competition, where the prize is a million dollars! But a new regulation at the community pool--no bears--leaves Ursula cut from the contest. Luckily, she encounters a group of undaunted animal swimmers at a local pond, and Ursula and her new team figure out a way to participate in the competition and make sure everyone is welcome at the pool once and for all. Filled with deadpan humor, adorable animals, and big themes about social justice and inclusion, Liz Starin's picture book Splashdance is a fun and splashy summer story with a lot of heart.

Liz Starin: Liz Starin studied illustration at the Hochschule für Grafik und Buchkunst in Leipzig, Germany; the Rhode Island School of Design; and the School of Visual Arts and the Fashion Institute of Technology in New York City. Liz previously worked as an editor with Junior Library Guild. Now she works as an author, illustrator, and computer programmer. She lives in Brooklyn, New York. She also runs the children's book illustration blog Pen and Oink. penandoink.com and cargocollective.com/lizstarin