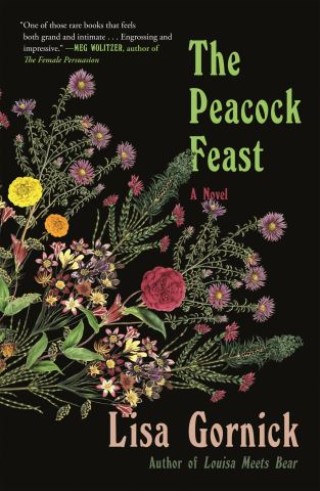 From “one of the most perceptive, compassionate writers of fiction in America...immensely talented and brave” (Michael Schaub, NPR), a historical saga about love, class, and the past we never escape.

The Peacock Feast opens on a June day in 1916 when Louis C. Tiffany, the eccentric glass genius, dynamites the breakwater at Laurelton Hall—his fantastical Oyster Bay mansion, with columns capped by brilliant ceramic blossoms and a smokestack hidden in a blue-banded minaret—so as to foil the town from reclaiming the beach for public use. The explosion shakes both the apple crate where Prudence, the daughter of Tiffany’s prized gardener, is sleeping and the rocks where Randall, her seven-year-old brother, is playing.

Nearly a century later, Prudence receives an unexpected visit at her New York apartment from Grace, a hospice nurse and the granddaughter of Randall, who Prudence never saw again after he left at age fourteen for California. The mementos Grace carries from her grandfather’s house stir Prudence’s long-repressed memories and bring her to a new understanding of the choices she made in work and love, and what she faces now in her final days.

Spanning the twentieth century and three continents, The Peacock Feast ricochets from Manhattan to San Francisco, from the decadent mansions of the Tiffany family to the death row of a Texas prison, and from the London consultation room of Anna Freud to a Mendocino commune. With psychological acuity and aching eloquence, Lisa Gornick has written a sweeping family drama, an exploration of the meaning of art and the art of dying, and an illuminating portrait of how our decisions reverberate across time and space.

Lisa Gornick: Lisa Gornick is the author of Louisa Meets Bear, Tinderbox, and A Private Sorcery. Her stories and essays have appeared widely, including in The New York Times, The Paris Review, Prairie Schooner, Real Simple, and The Wall Street Journal. She holds a B.A. from Princeton and a Ph.D. in clinical psychology from Yale, and is on the faculty of the Columbia University Center for Psychoanalytic Training and Research. A long-time New Yorker, she lives in Manhattan with her family.