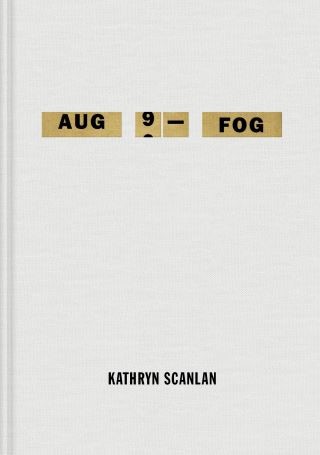 A Paris Review Staff Pick, one of Chicago Tribune's 25 Hot Books of Summer, and one of The A.V. Club's 15 Most Anticipated Books of 2019

A stark, elegiac account of unexpected pleasures and the progress of seasons

Fifteen years ago, Kathryn Scanlan found a stranger’s five-year diary at an estate auction in a small town in Illinois. The owner of the diary was eighty-six years old when she began recording the details of her life in the small book, a gift from her daughter and son-in-law. The diary was falling apart—water-stained and illegible in places—but magnetic to Scanlan nonetheless.

After reading and rereading the diary, studying and dissecting it, for the next fifteen years she played with the sentences that caught her attention, cutting, editing, arranging, and rearranging them into the composition that became Aug 9—Fog (she chose the title from a note that was tucked into the diary). “Sure grand out,” the diarist writes. “That puzzle a humdinger,” she says, followed by, “A letter from Lloyd saying John died the 16th.” An entire state of mourning reveals itself in “2 canned hams.” The result of Scanlan’s collaging is an utterly compelling, deeply moving meditation on life and death.

In Aug 9—Fog, Scanlan’s spare, minimalist approach has a maximal emotional effect, remaining with the reader long after the book ends. It is an unclassifiable work from a visionary young writer and artist—a singular portrait of a life revealed by revision and restraint.