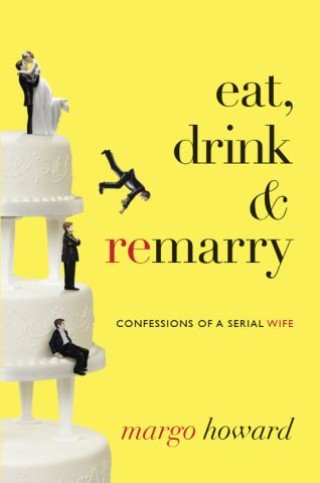 Confessions of a Serial Wife

Despite her many years of offering relationship advice as a syndicated columnistnot to mention her pedigree as the daughter of the woman the world revered as Ann Landers Margo Howard had to walk down the aisle four times before getting it right.

Now the outspoken and witty Howard shares the sometimes rueful, always optimistic story of her adventures in pursuit of the perfect mate. Eat Drink and Remarry is the candid, funny no-holds-barred memoir of Howard's enduring belief in marriage as an institutiondespite the often contrary evidence of her own experience. As she chronicles the courtships, marriages, dalliances and divorces that shaped her adulthood, she recalls people and events that left their mark on her life, including her famous (and frank) mother her children and a host of colleagues, from prize-winning journalists and scientists to Hollywood stars.

Eat, Drink and Remarry is an endearing book about second (and third and fourth) chances, about the sometimes cockeyed optimism of love and about finding what's right for youno matter how long it takes.

Margo Howard: After starting as a feature writer for the Chicago Tribune, Margo Howard began writing for publications such as the New Republic, the Nation, People, TV Guide, and Good Housekeeping. She returned to her familial roots when she became "Dear Prudence” at Slate. After 8 years she moved to Yahoo News as “Dear Margo.” The column was syndicated in 200 newspapers and at wowowow.com. She lives in Cambridge, MA, with Mr. Right #4.