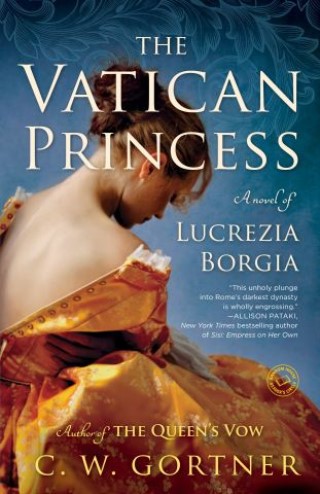 A Novel of Lucrezia Borgia

For fans of Philippa Gregory and Alison Weir, bestselling author C. W. Gortner effortlessly weaves history and drama in this captivating novel about one of the world’s most notorious families. Glamorous and predatory, the Borgias fascinated and terrorized fifteenth-century Renaissance Italy, and Lucrezia Borgia, beloved daughter of the pope, was at the center of the dynasty’s ambitions. Slandered as a heartless seductress who lured men to their doom, was she in fact the villainess of legend, or was she trapped in a familial web, forced to choose between loyalty and survival?

With the ascension of the Spaniard Rodrigo Borgia as Pope Alexander VI, a new era has dawned in Rome. Benefitting from their father’s elevation are the new pope’s illegitimate children—his rival sons, Cesare and Juan, and beautiful young daughter Lucrezia—each of whom assumes an exalted position in the papal court. Privileged and adored, Lucrezia yearns to escape her childhood and play a part in her family’s fortunes. But Rome is seductive and dangerous: Alliances shift at a moment’s notice as Italy’s ruling dynasties strive to keep rivals at bay. As Lucrezia’s father faces challenges from all sides, the threat of a French invasion forces him to marry her off to a powerful adversary. But when she discovers the brutal truth behind her alliance, Lucrezia is plunged into a perilous gambit that will require all her wits, cunning, and guile. Escaping her marriage offers the chance of happiness with a passionate prince of Naples, yet as scandalous accusations of murder and incest build against her, menacing those she loves, Lucrezia must risk everything to overcome the lethal fate imposed upon her by her Borgia blood.

Beautifully wrought, rich with fascinating historical detail, The Vatican Princess is the first novel to describe Lucrezia’s coming-of-age in her own voice. What results is a dramatic, vivid tale set in an era of savagery and unparalleled splendor, where enemies and allies can be one and the same, and where loyalty to family can ultimately be a curse.

Praise for The Vatican Princess

“In a literary exploration riven with Shakespearean quantities of murder, lies, deceptions, and treachery, Gortner’s narrative gains veracity with his atmospheric exploration of fashion, architecture, and art on the stage of ‘loud, filthy, and dangerous’ Rome. Gortner has imagined Lucrezia Borgia’s life from a feminist perspective.”—Kirkus Reviews

“[Gortner] has invested his novel with impressive historical detail that is woven neatly into the threads of the story, and his afterword and references offer excellent insight.”—Historical Novels Review

“Assiduously researched and expertly crafted, this novel takes readers inside the treacherous world of the Borgias—one of history’s most dysfunctional ruling families—and brings to life the sympathetic and freshly imagined character of their leading lady, Lucrezia. This unholy plunge into Rome’s darkest dynasty is wholly engrossing.”—Allison Pataki, New York Times bestselling author of Sisi: Empress on Her Own

“The world of Renaissance Italy is vividly brought to life—I’m captivated by this knowledgeable author’s take on the controversial Borgias.”—Alison Weir, New York Times bestselling author of Katherine of Aragon, The True Queen

“Impressive research, a lush background, and deft characterization of these turbulent times make for a fascinating read.”—Margaret George, New York Times bestselling author of Elizabeth I

C. W. Gortner: C. W. Gortner holds an MFA in writing, with an emphasis on historical studies, from the New College of California and has taught university courses on women of power in the Renaissance. He is the internationally acclaimed author of Mademoiselle Chanel, The Queen’s Vow, The Confessions of Catherine de Medici, and The Last Queen, among other books. Gortner divides his time between Northern California and Antigua, Guatemala. To learn more about his work and to schedule a book group chat with him, please visit his website.