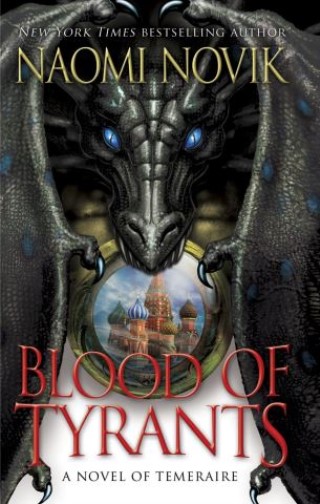 A Novel of Temeraire

Naomi Novik’s beloved Temeraire series, a brilliant combination of fantasy and history that reimagines the Napoleonic wars as fought with the aid of intelligent dragons, is a twenty-first-century classic. From the first volume, His Majesty’s Dragon, readers have been entranced by the globe-spanning adventures of the resolute Capt. William Laurence and his brave but impulsive dragon, Temeraire. Now, in Blood of Tyrants, the penultimate volume of the series, Novik is at the very height of her powers as she brings her story to its widest, most colorful canvas yet.

Shipwrecked and cast ashore in Japan with no memory of Temeraire or his own experiences as an English aviator, Laurence finds himself tangled in deadly political intrigues that threaten not only his own life but England’s already precarious position in the Far East. Age-old enmities and suspicions have turned the entire region into a powder keg ready to erupt at the slightest spark—a spark that Laurence and Temeraire may unwittingly provide, leaving Britain faced with new enemies just when they most desperately need allies instead.

For to the west, another, wider conflagration looms. Napoleon has turned on his former ally, the emperor Alexander of Russia, and is even now leading the largest army the world has ever seen to add that country to his list of conquests. It is there, outside the gates of Moscow, that a reunited Laurence and Temeraire—along with some unexpected allies and old friends—will face their ultimate challenge . . . and learn whether or not there are stronger ties than memory.

BONUS: This edition includes an excerpt from Naomi Novik's Uprooted.

Praise for Blood of Tyrants

“A first-class entry in a remarkable and appealing series.”—Kirkus Reviews (starred review)

“Novik’s plots and characterizations get more intricate and plausible with each novel. . . . Novik’s re-creation of much of world history based on the existence of intelligent dragons has been so well crafted that all eight books in the series are highly recommended.”—Booklist (starred review)

“If you’ve never read these novels, now is the time to start.”—io9

Naomi Novik: Naomi Novik is the acclaimed author of His Majesty’s Dragon, Throne of Jade, Black Powder War, Empire of Ivory, Victory of Eagles, Tongues of Serpents, Crucible of Gold, and Blood of Tyrants, the first eight volumes of the Temeraire series. She has been nominated for the Hugo Award and has won the John W. Campbell Award for Best New Writer, as well as the Locus Award for Best New Writer and the Compton Crook Award for Best First Novel. She is also the author of the graphic novel Will Supervillains Be on the Final?

Fascinated with both history and legends, Novik is a first-generation American raised on Polish fairy tales and stories of Baba Yaga. Her own adventures include pillaging degrees in English literature and computer science from various ivory towers, designing computer games, and helping to build the Archive of Our Own for fanfiction and other fanworks. Novik is a co-founder of the Organization for Transformative Works.

She lives in New York City with her husband, Charles Ardai, the founder of Hard Case Crime, and their daughter, Evidence, surrounded by an excessive number of purring computers.