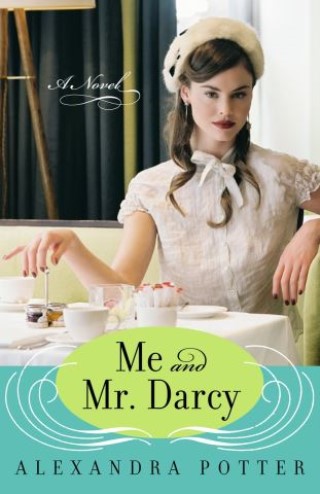 Me and Mr. Darcy

After a string of disastrous dates, Emily Albright decides she’s had it with modern-day love and would much rather curl up with Pride and Prejudice and spend her time with Mr. Darcy, the dashing, honorable, and passionate hero of Jane Austen’s classic. So when her best friend suggests a wild week of margaritas and men in Mexico with the girls, Emily abruptly flees to England on a guided tour of Jane Austen country instead. Far from inspiring romance, the company aboard the bus consists of a gaggle of little old ladies and one single man, Spike Hargreaves, a foul-tempered journalist writing an article on why the fictional Mr. Darcy has earned the title of Man Most Women Would Love to Date.

The last thing Emily expects to find on her excursion is a broodingly handsome man striding across a field, his damp shirt clinging to his chest. But that’s exactly what happens when she comes face-to-face with none other than Mr. Darcy himself. Suddenly, every woman’s fantasy becomes one woman’s reality. . . .

Praise for Me and Mr. Darcy:

“…Unexpectedly charming. . . Me and Mr. Darcy offers a Pride and Prejudice - appropriate surprise. . . it turns out to be one of the wittier of this summer's offerings, not to mention sharp and sad in its observations about what spinsterhood, identity and aging look like for women in 2007.” — Salon

“[Me and Mr. Darcy] takes the reader on an extended daydream with an appropriately pleasant ending. “ — The Indianapolis Star

“Alexandra Potter’s clever comedy, an affectionate celebration of books and readers — and bookstores — might lead you to start browsing those travel websites yourself.”
— The Times- Picayune

“Pure candy for the imagination. . . Ms. Potter has worked literary magic with the creation of Me and Mr. Darcy.” — CoffeeTimeRomance.com

Alexandra Potter: Alexandra Potter was born in Yorkshire, England. Having lived in Los Angeles, Sydney, and London after university, she finally decided to settle where the sun is and now lives full-time in California. She has worked as a features editor and subeditor for women’s magazines in the United Kingdom, and currently writes full-time.