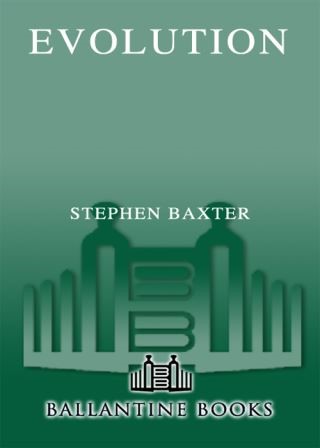 “Magisterial and uplifting . . . A brilliant, grandscale sampling of sixty-five million years of human evolution . . . It shows the sweep and grandeur of life in its unrelenting course.” —The Denver Post

Stretching from the distant past into the remote future, from primordial Earth to the stars, Evolution is a soaring symphony of struggle, extinction, and survival; a dazzling epic that combines a dozen scientific disciplines and a cast of unforgettable characters to convey the grand drama of evolution in all its awesome majesty and rigorous beauty. Sixty-five million years ago, when dinosaurs ruled the Earth, there lived a small mammal, a proto-primate of the species Purgatorius. From this humble beginning, Baxter traces the human lineage forward through time. The adventure that unfolds is a gripping odyssey governed by chance and competition, a perilous journey to an uncertain destination along a route beset by sudden and catastrophic upheavals. It is a route that ends, for most species, in stagnation or extinction. Why should humanity escape this fate?

“Strong imagination, a capacity for awe, and the ability to think rigorously about vast and final things abound in the work of Stephen Baxter. . . . [Evolution] leaves the reader with a haunting portrayal of the distant future.”—Times Literary Supplement

“A breath of fresh air . . . The miracle of Evolution is that it makes the triumph of life, which is its story, sound like the real story.”—The Washington Post Book World

Stephen Baxter: Stephen Baxter is a trained engineer with degrees from Cambridge (mathematics) and Southampton Universities (doctorate in aeroengineering research). Baxter is the winner of the British Science Fiction Award and the Locus Award, as well as being a nominee for an Arthur C. Clarke Award, most recently for Manifold: Time. His novel Voyage won the Sidewise Award for Best Alternate History Novel of the Year; he also won the John W. Campbell Award and the Philip K. Dick Award for his novel The Time Ships. He is currently working on his next novel, a collaboration with Sir Arthur C. Clarke.