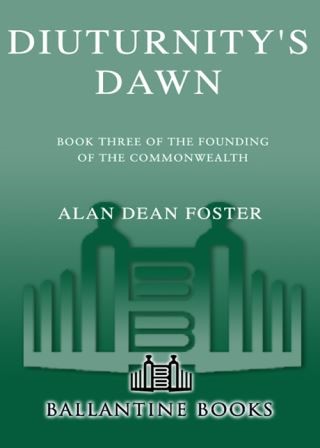 Book Three of the Founding of the Commonwealth

In nearly two dozen novels about the Humanx Commonwealth, Alan Dean Foster has fascinated readers with his brilliantly imagined interstellar realm–where humans, thranx, AAnn, and other species strive to work together to put the common good above selfish ends. But renewed efforts at cooperation prove that familiarity breeds contempt. Diuturnity’s Dawn is the third thrilling novel in The Founding of the Commonwealth, a spectacular space adventure that traces the perilous early years of this remarkable universe.

From the beginning, while sharing the Orion Arm of the galaxy, contact between humankind and the thranx has been tenuous at best. Yet nearly a century after first contact, the likelihood of closer human/thranx relations is as far away as ever. Humans still find these insectlike beings physically repulsive, a distaste the thranx return in kind. At times the cordial veneer barely conceals the suspicion and distrust boiling just below the surface.

Yet idealists on both sides refuse to surrender their dreams of achieving a thranx/human alliance. Among the most dedicated are a minor diplomat named Fanielle Anjou and her thranx counterpart. Others intend to make sure such a liaison never comes to pass . . . by any means necessary.

For these xenophobes, the upcoming Humanx Inter-Cultural Fair, the first wholly cross-species event, is a hideous confirmation of their worst fears. Zealots on both sides vow it will be the last of its kind, no matter how many must die. In the coming conflagration Fanielle holds the key to triumph but only if she can outwit those desperate to silence her forever.

Meanwhile, on a faraway planet, the duplicitous AAnn watch intently as archaeologists labor to discover what happened to an advanced human race that perished thousands of years ago. For the answers contain grave consequences for human, thranx, and AAnn alike . . .

Alan Dean Foster: Alan Dean Foster has written in a variety of genres, including hard science fiction, fantasy, horror, detective, western, historical, and contemporary fiction. He is the author of the forthcoming Star Wars novel The Approaching Storm. He is also the author of numerous non-fiction articles on film, science, and scuba diving, as well as novel versions of several films including Star Wars, the first three Alien films, and Alien Nation. His novel Cyber Way won the Southwest Book Award for Fiction in 1990, the first science fiction work to ever do so.

Foster’s love of the far-away and exotic has led him to travel extensively. He’s lived in Tahiti and French Polynesia, traveled to Europe, Asia, and throughout the Pacific, and has explored the back roads of Tanzania and Kenya. He has rappelled into New Mexico’s fabled Lechugilla Cave, pan fried pirhana (lots of bones, tastes a lot like trout) in Peru, white-water rafted the length of the Zambezi’s Batoka Gorge, and driven solo the length and breadth of Namibia.

Foster and his wife, JoAnn Oxley, reside in Prescott, Arizona, reside in a house built of brick that was salvaged from a turn-of-the-century miners’ brothel. He is presently at work on several new novels and media projects.