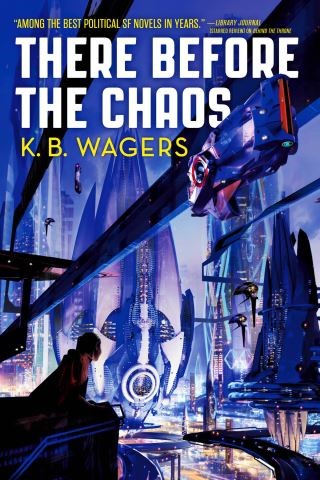 There Before the Chaos

The first volume of an epic space opera trilogy featuring the gunrunner empress Hail Bristol, who must navigate alien politics and deadly plots to prevent an interspecies war.
Hail Bristol: former runaway princeess, interplanetary gunrunner, Empress of Indrana.
When the Empire's closest ally asks her to intervene in a galactic military crisis, she embarks on the highest stakes diplomatic mission Indrana has ever faced.
Caught between two powerful alien civilizations at each other's throats, Hail has one chance to make peace, before all of humanity becomes collateral damage in a full-blown galactic war.
There Before the Chaos begins a fresh, pulse-pounding space opera series from an exciting new voice in science fiction.
For more from K. B. Wagers, check out:
The Indranan War
Behind the Throne
After the Crown
Beyond the Empire