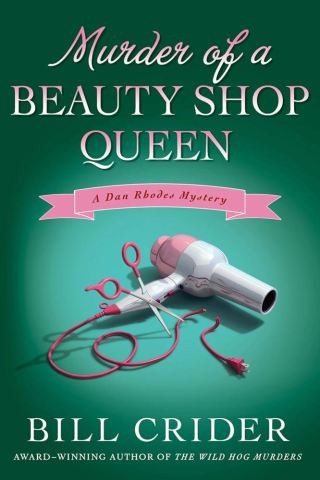 Murder of a Beauty Shop Queen

Dan Rhodes, sheriff of Blacklin County, Texas, is called to the Beauty Shack, where the young and pretty Lynn Ashton has been found dead, bashed over the head with a hairdryer. The owner said Lynn had gone to the salon late to meet an unknown client. There was a lot of gossip going on about Lynn before her death, but no one seems to really know much about her, or they're not telling Rhodes.

Lynn was known to flirt, and it's possible an angry wife or jilted lover had something to do with her death. The salon owner suspects two outsiders who have been staying in an abandoned building across the street. While he investigates the murder, Rhodes must also deal with the theft of copper and car batteries, not to mention a pregnant nanny goat that is terrorizing the town.

Murder of a Beauty Shop Queen is a wonderful entry in this always delightful series by award-winning author Bill Crider.

Bill Crider: Bill Crider is the winner of two Anthony Awards and an Edgar Award finalist. An English college professor for many years, he has published more than seventy-five crime, Western, and horror novels, including the Sheriff Dan Rhodes mysteries That Old Scoundrel Death, Survivors Will Be Shot Again, The Wild Hog Murders and Murder in the Air. In 2010, he was inducted into the Texas Literary Hall of Fame. He lives with his wife in Alvin, Texas.