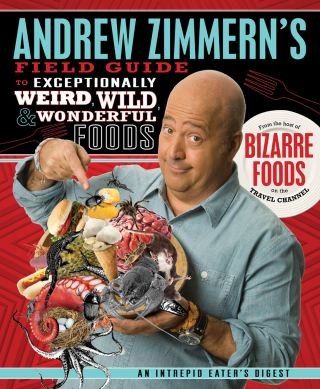 Now, Andrew is sharing his most hilarious culinary experiences--as well as fun facts about culture, geography, art, and history, to name a few--with readers of all ages. Don't like broccoli? Well, what if you were served up a plate of brains, instead? From alligator meat to wildebeest, this digest of Andrew's most memorable weird, wild, and wonderful foods will fascinate and delight eaters of all ages, intrepid and...not so much.

ANDREW ZIMMERN is a chef, food writer, and teacher, as well as the host of the Travel Channel's hit show, Bizarre Foods with Andrew Zimmern and Bizarre Foods America. Andrew has been a featured guest on various popular national television shows such as NBC's Today Show, The Dr. Oz Show, Access Hollywood, Nightline, and E!'s The Soup. Born and raised in New York City, Andrew currently resides in Minnesota with his wife and son.

MOLLY MOGREN has worked with Andrew Zimmern since 2007, and while her favorite bizarre food is smelt fries (that's deep fried, whole fish), she's typically craving a regular ol' slice of pizza or spicy Thai food. She lives in Minneapolis, Minnesota.