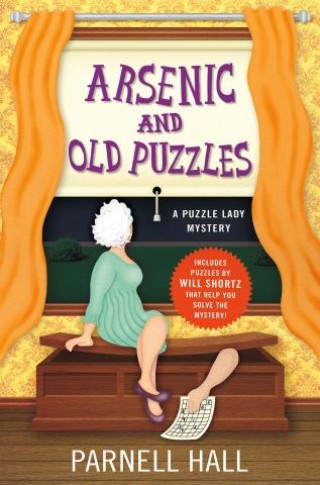 When an elderly boarder at a Bakerhaven bed-and-breakfast drops dead during afternoon tea, there's nothing particularly suspicious about it—except for the Sudoku in his jacket pocket. But when a second body turns up in the window seat and an autopsy shows both men were poisoned with elderberry wine, the Puzzle Lady suspects she's dealing with a cold-blooded killer who for some reason is copying the Cary Grant movie Arsenic and Old Lace, in which two old ladies who run a boarding house poison elderly widowers and bury them in the basement. More murders, more puzzles, and a grave dug in the cellar seem to cement the theory.

Ordinarily, Cora would eat a case like this for breakfast, but for once she can't figure it out. And she's not sure if the clues don't add up, or if the much-married Puzzle Lady is just distracted by being involved in her first romantic entanglement in years.

Arsenic and Old Puzzles is filled with laughs, mayhem, and fun new puzzles by Will Shortz. Mystery and puzzle fans will find much to enjoy in this latest treat from Parnell Hall.