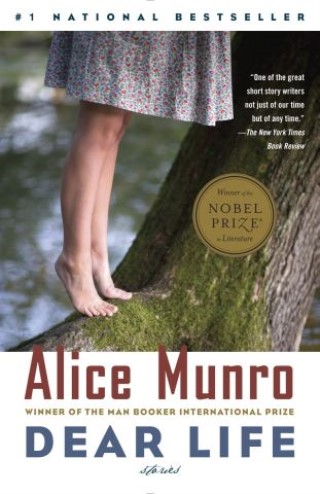 WINNER OF THE NOBEL PRIZE© IN LITERATURE 2013

In story after story in this brilliant new collection, Alice Munro pinpoints the moment a person is forever altered by a chance encounter, an action not taken, or a simple twist of fate. Her characters are flawed and fully human: a soldier returning from war and avoiding his fiancée, a wealthy woman deciding whether to confront a blackmailer, an adulterous mother and her neglected children, a guilt-ridden father, a young teacher jilted by her employer. Illumined by Munro’s unflinching insight, these lives draw us in with their quiet depth and surprise us with unexpected turns. And while most are set in her signature territory around Lake Huron, some strike even closer to home: an astonishing suite of four autobiographical tales offers an unprecedented glimpse into Munro’s own childhood. Exalted by her clarity of vision and her unparalleled gift for storytelling, Dear Life shows how strange, perilous, and extraordinary ordinary life can be.

Alice Munro: Alice Munro grew up in Wingham, Ontario, and attended the University of Western Ontario.  She has published twelve collections of stories and two volumes of selected stories, as well as a novel. During her distinguished career she has been the recipient of many awards and prizes, including three of Canada’s Governor General’s Literary Awards and two of its Giller Prizes, the Rea Award for the Short Story, the Lannan Literary Award, England’s W. H. Smith Literary Award, the United States’ National Book Critics Circle Award, the Edward MacDowell Medal in literature, and the Man Booker International Prize. Her stories have appeared in The New Yorker, The Atlantic Monthly, Harper’s Magazine, Granta, and other publications, and her collections have been translated into thirteen languages.  Alice Munro lives in Clinton, Ontario, near Lake Huron.