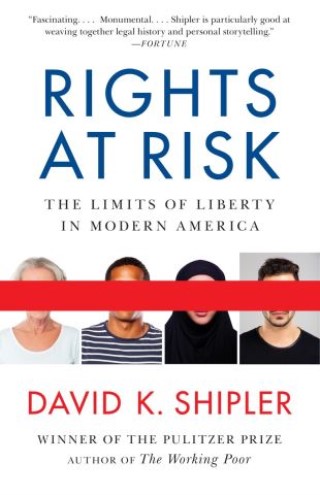 The Limits of Liberty in Modern America

An enlightening, intensely researched examination of violations of the constitutional principles that preserve individual rights and civil liberties from courtrooms to classrooms.

With telling anecdote and detail, Pulitzer Prize–winner David K. Shipler explores the territory where the Constitution meets everyday America, where legal compromises—before and since 9/11—have undermined the criminal justice system’s fairness, enhanced the executive branch’s power over citizens and immigrants, and impaired some of the freewheeling debate and protest essential in a constitutional democracy.

Shipler demonstrates how the violations tamper with America’s safety in unexpected ways. While a free society takes risks to observe rights, denying rights creates other risks. A suspect’s right to silence may deprive police of a confession, but a forced confession is often false. Honoring the right to a jury trial may be cumbersome, but empowering prosecutors to coerce a guilty plea means evidence goes untested, the charge unproved. An investigation undisciplined by the Bill of Rights may jail the innocent and leave the guilty at large and dangerous. Weakened constitutional rules allow the police to waste precious resources on useless intelligence gathering and frivolous arrests. The criminal courts act less as impartial adjudicators than as conveyor belts from street to prison in a system that some disillusioned participants have nicknamed “McJustice.”

There is, always, a human cost. Shipler shows us victims of torture and abuse—not only suspected terrorists at the hands of the CIA but also murder suspects interrogated by the Chicago police. We see a poverty-stricken woman forced to share an attorney with her drug dealer boyfriend and sentenced to six years in prison when the conflict of interest turns her lawyer against her. We meet high school students suspended for expressing unwelcome political opinions. And we see a pregnant immigrant deported, after years of living legally in the country, for allegedly stealing a lottery ticket.

Often shocking, yet ultimately idealistic, Rights at Risk shows us the shadows of America where the civil liberties we rightly take for granted have been eroded—and summons us to reclaim them.

David K. Shipler: David K. Shipler reported for The New York Times from 1966 to 1988 in New York, Saigon, Moscow, Jerusalem, and Washington, D.C. He is the author of five other books, including the best sellers Russia and The Working Poor, as well as Arab and Jew, which won the Pulitzer Prize. Shipler, who has been a guest scholar at the Brookings Institution and a senior associate at the Carnegie Endowment for International Peace, has taught at Princeton University; at American University in Washington, D.C.; and at Dartmouth College. He writes online at The Shipler Report.