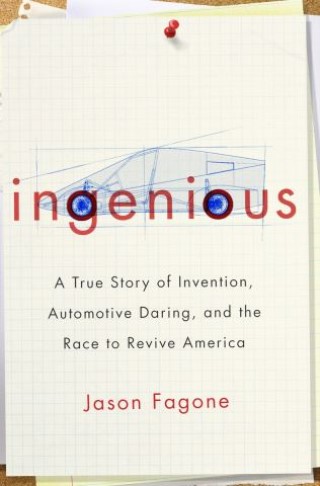 A True Story of Invention, Automotive Daring, and the Race to Revive America

An epic tale of invention, in which ordinary people’s lives are changed forever by their quest to engineer a radically new kind of car

In 2007, the X Prize Foundation announced that it would give $10 million to anyone who could build a safe, mass-producible car that could travel 100 miles on the energy equivalent of a gallon of gas. The challenge attracted more than one hundred teams from all over the world, including dozens of amateurs. Many designed their cars entirely from scratch, rejecting decades of thinking about what a car should look like.
Jason Fagone follows four of those teams from the build stage to the final race and beyond—into a world in which destiny hangs on a low drag coefficient and a lug nut can be a beautiful talisman. The result is a gripping story of crazy collaboration, absurd risks, colossal hopes, and poignant losses. In an old pole barn in central Illinois, childhood sweethearts hack together an electric-powered dreamboat, using scavenged parts, forging their own steel, and burning through their life savings.  In Virginia, an impassioned entrepreneur and his hand-picked squad of speed freaks pool their imaginations and build a car so light that you can push it across the floor with your thumb. In West Philly, a group of disaffected high school students come into their own as they create a hybrid car with the engine of a Harley motorcycle. And in Southern California, the early favorite—a start-up backed by millions in venture capital—designs a car that looks like an alien egg.
Ingenious is a joyride. Fagone takes us into the garages and the minds of the inventors, capturing the fractious yet beautiful process of engineering a bespoke machine. Suspenseful and bighearted, this is the story of ordinary people risking failure, economic ruin, and ridicule to create something vital that Detroit had never pulled off. As the Illinois team wrote in chalk on the wall of their barn, "SOMEBODY HAS TO DO SOMETHING. THAT SOMEBODY IS US."

Jason Fagone has written about science, sports, and culture for GQ, Wired, The Atlantic, New York, Grantland, Mother Jones, the New York Times Magazine, and The Best American Sports Writing. He is the author of one previous nonfiction book, Horsemen of the Esophagus, about competitive eaters, and is the recipient of a Knight-Wallace Fellowship in journalism. He lives in Texas with his wife and daughter. Visit @jfagone on Twitter.