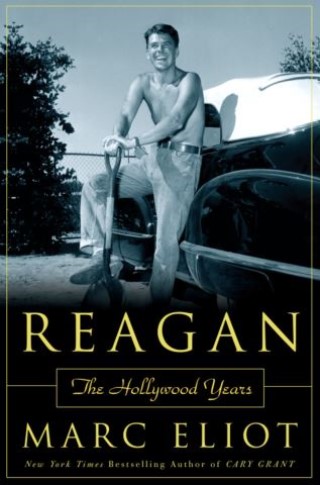 Ronald Reagan was one of the most powerful and popular American presidents. The key to understanding his political success and the remarkable likability and effortless charisma that made it possible is hidden in his early years as a Hollywood movie star.

Other biographers and Reagan in his two memoirs have skimmed over the thirty years he spent as an actor, union activist, and ladies’ man. Now, for the first time, in this highly entertaining and provocative new work, acclaimed film critic and historian Marc Eliot reveals the truth of those formative years and presents a far different and infinitely more detailed portrait of Reagan than ever before.

Based on original research and never-before-published interviews, documents, and other materials, Eliot sheds new light on Reagan’s film and television work opposite some of the most talented women of the time, including Bette Davis, Ann Sheridan, and Ginger Rogers; his starlet-strewn bachelor days when his name was linked with Lana Turner and Susan Hayward; his first, rocky marriage to actress Jane Wyman and his career-making second marriage to Nancy Davis; his controversial eight years as the president of the Screen Actors Guild; his friendships with Jimmy Stewart and William Holden; his place in the “Irish Mafia” alongside Pat O’Brien, Spencer Tracy, Humphrey Bogart, James Cagney, and Errol Flynn; and the crucial role of super-agent Lew Wasserman, who was instrumental in developing the persona that would prove essential to Reagan’s future as a world leader.

Set against the glamorous and often combative background of Hollywood’s celebrated Golden Age, Eliot’s biography provides an exceptionally nuanced examination of the man and uncovers the startling origins of the legend.

Marc Eliot: MARC ELIOT is the New York Times bestselling author of more than a dozen books on popular culture, among them the highly acclaimed biographies Cary Grant and Jimmy Stewart, the award-winning Walt Disney: Hollywood’s Dark Prince, Down 42nd Street, Take It from Me (with Erin Brockovich), Down Thunder Road: The Making of Bruce Springsteen, To the Limit: The Untold Story of the Eagles, and Death of a Rebel. He has written on the media and popular culture for numerous publications, including Penthouse, L.A. Weekly, and California Magazine. He divides his time among New York City, Woodstock, New York, and Los Angeles.