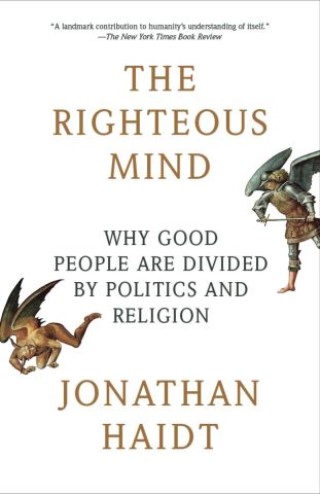 Why Good People Are Divided by Politics and Religion

In this “landmark contribution to humanity’s understanding of itself” (The New York Times Book Review) social psychologist Jonathan Haidt challenges conventional thinking about morality, politics, and religion in a way that speaks to conservatives and liberals alike.

Drawing on his twenty five years of groundbreaking research on moral psychology, Haidt shows how moral judgments arise not from reason but from gut feelings. He shows why liberals, conservatives, and libertarians have such different intuitions about right and wrong, and he shows why each side is actually right about many of its central concerns. In this subtle yet accessible book, Haidt gives you the key to understanding the miracle of human cooperation, as well as the curse of our eternal divisions and conflicts. If you’re ready to trade in anger for understanding, read The Righteous Mind.

Jonathan Haidt is the Thomas Cooley Professor of Ethical Leadership at New York University's Stern School of Business. He is the author of The Happiness Hypothesis: Finding Modern Truth in Ancient Wisdom. He lives in New York City.