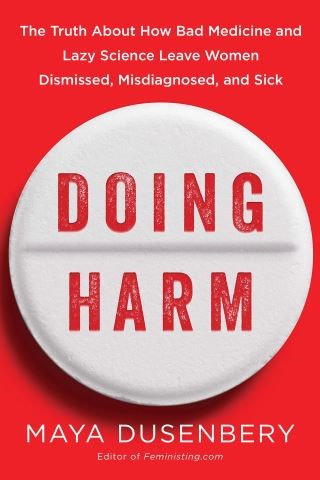 The Truth About How Bad Medicine and Lazy Science Leave Women Dismissed, Misdiagnosed, and Sick

Editor of the award-winning site Feministing.com, Maya Dusenbery brings together scientific and sociological research, interviews with doctors and researchers, and personal stories from women across the country to provide the first comprehensive, accessible look at how sexism in medicine harms women today.

In Doing Harm, Dusenbery explores the deep, systemic problems that underlie women’s experiences of feeling dismissed by the medical system. Women have been discharged from the emergency room mid-heart attack with a prescription for anti-anxiety meds, while others with autoimmune diseases have been labeled “chronic complainers” for years before being properly diagnosed. Women with endometriosis have been told they are just overreacting to “normal” menstrual cramps, while still others have “contested” illnesses like chronic fatigue syndrome and fibromyalgia that, dogged by psychosomatic suspicions, have yet to be fully accepted as “real” diseases by the whole of the profession.

An eye-opening read for patients and health care providers alike, Doing Harm shows how women suffer because the medical community knows relatively less about their diseases and bodies and too often doesn’t trust their reports of their symptoms. The research community has neglected conditions that disproportionately affect women and paid little attention to biological differences between the sexes in everything from drug metabolism to the disease factors—even the symptoms of a heart attack. Meanwhile, a long history of viewing women as especially prone to “hysteria” reverberates to the present day, leaving women battling against a stereotype that they’re hypochondriacs whose ailments are likely to be “all in their heads.”

Offering a clear-eyed explanation of the root causes of this insidious and entrenched bias and laying out its sometimes catastrophic consequences, Doing Harm is a rallying wake-up call that will change the way we look at health care for women.

MAYA DUSENBERY is a writer and editor of the award-winning site Feministing.com. She has been a fellow at Mother Jones magazine and a columnist for Pacific Standard magazine. Before becoming a journalist, she worked at the National Institute for Reproductive Health. A Minnesota native, she is currently based in the Twin Cities.