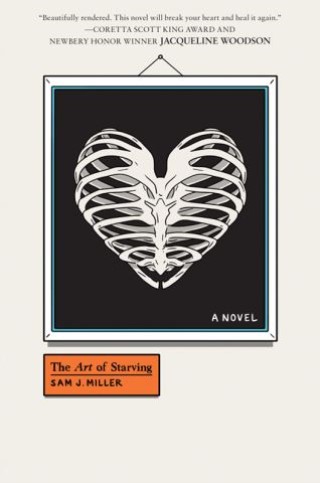 The Art of Starving

“Funny, haunting, beautiful, relentless, and powerful, The Art of Starving is a classic in the making.”—Book Riot

Matt hasn’t eaten in days. His stomach stabs and twists inside, pleading for a meal, but Matt won’t give in. The hunger clears his mind, keeps him sharp—and he needs to be as sharp as possible if he’s going to find out just how Tariq and his band of high school bullies drove his sister, Maya, away.

Matt’s hardworking mom keeps the kitchen crammed with food, but Matt can resist the siren call of casseroles and cookies because he has discovered something: the less he eats the more he seems to have . . . powers. The ability to see things he shouldn’t be able to see. The knack of tuning in to thoughts right out of people’s heads. Maybe even the authority to bend time and space.

So what is lunch, really, compared to the secrets of the universe?

Matt decides to infiltrate Tariq’s life, then use his powers to uncover what happened to Maya. All he needs to do is keep the hunger and longing at bay. No problem. But Matt doesn’t realize there are many kinds of hunger…and he isn’t in control of all of them.

A darkly funny, moving story of body image, addiction, friendship, and love, Sam J. Miller’s debut novel will resonate with any reader who’s ever craved the power that comes with self-acceptance.

Sam J. Miller lives in New York City now, but grew up in a small town in upstate New York. He is the last in a long line of butchers. In no particular order, he has also been a film critic, a grocery bagger, a community organizer, a secretary, a painter’s assistant and model, and the guitarist in a punk rock band. His fiction has been nominated for the Nebula Award and the Theodore Sturgeon Award, was long-listed for the Hugo Award, and has won the Shirley Jackson Award. He’s a graduate of the Clarion Writers Workshop. His husband of fifteen years is a nurse practitioner and is way smarter and handsomer than Sam. You can visit him online at www.samjmiller.com.