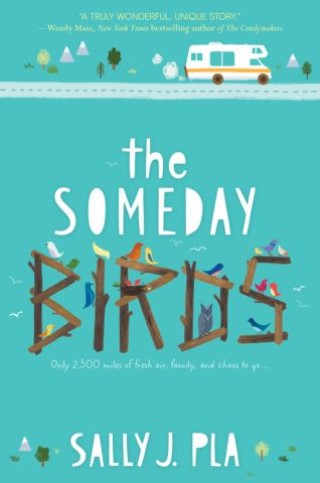 The Someday Birds is a debut middle grade novel perfect for fans of Counting by 7s and Fish in a Tree, filled with humor, heart, and chicken nuggets.

Charlie’s perfectly ordinary life has been unraveling ever since his war journalist father was injured in Afghanistan.

When his father heads from California to Virginia for medical treatment, Charlie reluctantly travels cross-country with his boy-crazy sister, unruly brothers, and a mysterious new family friend. He decides that if he can spot all the birds that he and his father were hoping to see someday along the way, then everything might just turn out okay.

Debut author Sally J. Pla has written a tale that is equal parts madcap road trip, coming-of-age story for an autistic boy who feels he doesn’t understand the world, and an uplifting portrait of a family overcoming a crisis.

“Pla gives us a memorable hero in this lyrical and funny book.” —Shelf Awareness (starred review)

Sally J. Pla: Sally J. Pla is the author of The Someday Birds (her debut novel) and Stanley Will Probably Be Fine. She has traveled on family road trips to most everywhere in this story. She has English degrees from Colgate and Penn State and has worked as a business journalist and in public education. She has three sons, a husband, and an enormous, fluffy dog and lives near lots of lemon trees in Southern California. You can visit her online at www.sallyjpla.com.