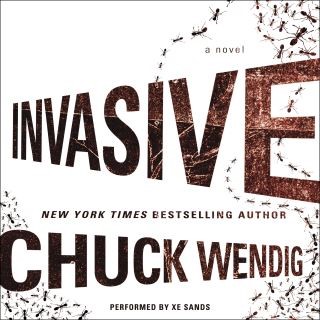 “Think Thomas Harris’ Will Graham and Clarice Starling rolled into one and pitched on the knife’s edge of a scenario that makes Jurassic Park look like a carnival ride. Another rip-roaring, deeply paranoid thriller about the reasons to fear the future.” -- Kirkus Reviews (starred review)

Hannah Stander is a consultant for the FBI—a futurist who helps the Agency with cases that feature demonstrations of bleeding-edge technology. It’s her job to help them identify unforeseen threats: hackers, AIs, genetic modification, anything that in the wrong hands could harm the homeland.

Hannah is in an airport, waiting to board a flight home to see her family, when she receives a call from Agent Hollis Copper. “I’ve got a cabin full of over a thousand dead bodies,” he tells her. Whether those bodies are all human, he doesn’t say.

What Hannah finds is a horrifying murder that points to the impossible—someone weaponizing the natural world in a most unnatural way. Discovering who—and why—will take her on a terrifying chase from the Arizona deserts to the secret island laboratory of a billionaire inventor/philanthropist. Hannah knows there are a million ways the world can end, but she just might be facing one she could never have predicted—a new threat both ancient and cutting-edge that could wipe humanity off the earth.

Chuck Wendig is the author of the Miriam Black thrillers (which begin with Blackbirds) and numerous other works across books, comics, games, and more. A finalist for the John W. Campbell Award for Best New Writer and the cowriter of the Emmy-nominated digital narrative Collapsus, he is also known for his popular blog, terribleminds.com. He lives in Pennsylvania with his family.