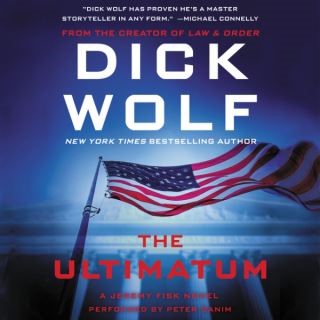 Detective Jeremy Fisk tracks a serial sniper who has mastered state-of-the-art airborne technology to hunt his prey in this chilling thriller from the New York Times bestselling author and creator of the Law & Order franchise.

When a leaker named Verlyn Merritt releases sensitive documents from the NYPD Intelligence Division to WikiLeaks, some of the deadliest criminals have access to Detective Jeremy Fisk’s unlisted home address. Within hours, three mysterious assailants arrive at his Sutton Place apartment. Who are they and why do they want Fisk dead?

Authorities quickly identify and arrest Merritt. But the case takes a sinister twist when an anonymous third party makes threats if authorities don’t release Merritt immediately. Forced from his home and his bank accounts drained, Fisk confronts Chay Maryland, a reporter who has been covering Merritt’s case. Fisk wants the journalist’s help to get close to the leaker—to find out what Merritt really wants and who else is involved.

The investigation is nearly derailed when a serial sniper begins shooting people on the street who seem to have no connection to Merritt’s case. The killer’s aim is eerily accurate—and Fisk believes the shooter might be using a drone rigged with unusual sighting capabilities. Then the sniper contacts the New York Times and promises to kill one person every day, “for the greater good of the citizens of America.

With the clock ticking and millions of lives at stake, Fisk and Chay must find the mastermind before he can wreak havoc on a city paralyzed by fear.

Dick Wolf, a two-time Emmy award-winning writer, producer, and creator, is the architect of one of the most successful brands in the history of television—NBC's Law & Order, one of the longest-running scripted shows. Wolf is also the creator and executive producer of Chicago Fire and Chicago P.D. He has won numerous awards, including Emmys for Outstanding Drama Series (Law & Order) and Outstanding Made-for-Television Movie (Bury My Heart at Wounded Knee); a Grammy; and an Edgar. Wolf is the New York Times bestselling author of The Intercept and The Execution. The Ultimatum is the third book in his Jeremy Fisk series. He lives in Southern California.