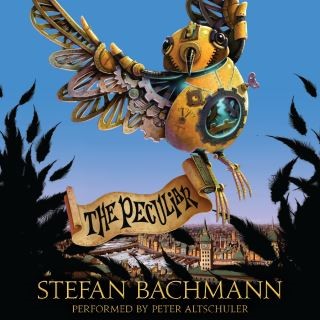 Don't get yourself noticed and you won't get yourself hanged. In the faery slums of Bath, Bartholomew and his little sister Hettie live by these words. Bartholomew and Hettie are Peculiars, and neither faeries nor humans want anything to do with them. But when Peculiars start showing up in London murdered and covered with red tattoos, Bartholomew breaks all the rules and gets himself noticed. Full of magic, dazzling inventions, and intriguing characters such as Mr. Jelliby and Lord Lickerish, this story of friendship, bravery, and nonstop action adventure was hailed by best-selling author Christopher Paolini as "swift, strong, and entertaining. Highly recommended." The Peculiar ends with a spectacular cliff-hanger, and the story concludes in The Whatnot.

Stefan Bachmann is the author of the internationally bestselling novel The Peculiar and its acclaimed sequel, The Whatnot. He was born in Colorado, spent most of his childhood in Switzerland, and is now studying modern music at the Zürich University of the Arts. When he’s not writing, he can be found traveling to someplace chilly, or holed up beneath his college in the dimly lit labyrinth of practice rooms, which may have inspired the subterranean scenes in A Drop of Night. That . . . and the Paris catacombs, a weird dream about a golden corridor, and a general interest in history.