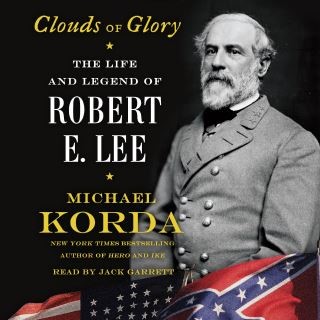 The Life and Legend of Robert E. Lee

Michael Korda, author of Ulysses S. Grant and the bestsellers Ike and Hero, paints a vivid and admiring portrait of Lee as a brilliant general, a devoted family man, and principled gentleman who disliked slavery and disagreed with secession, yet who refused command of the Union Army in 1861 because he could not “draw his sword” against his beloved Virginia.

Well-rounded and realistic, Clouds of Glory analyzes Lee's command during the Civil War and explores his responsibility for the fatal stalemate at Antietam, his defeat at Gettysburg (as well the many troubling controversies still surrounding it) and ultimately, his failed strategy for winning the war. As Korda shows, Lee's dignity, courage, leadership, and modesty made him a hero on both sides of the Mason-Dixon Line and a revered American icon who is recognized today as the nation's preeminent military leader.

Michael Korda is the author of Ulysses S. Grant, Ike, Hero, and Charmed Lives. Educated at Le Rosey in Switzerland and at Magdalen College, Oxford, he served in the Royal Air Force. He took part in the Hungarian Revolution of 1956 and on its fiftieth anniversary was awarded the Order of Merit of the People's Republic of Hungary. He and his wife, Margaret, make their home in Dutchess County, New York.