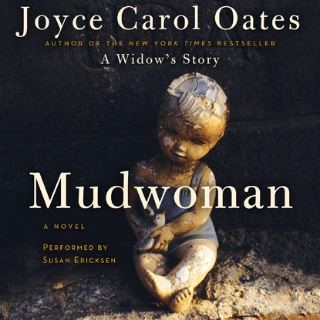 “Oates is just a fearless writer…with her brave heart and her impossibly lush and dead-on imaginative powers.”
—Los Angeles Times

One of the most acclaimed writers in the world today, the inimitable Joyce Carol Oates follows up her searing, New York Times bestselling memoir, A Widow’s Story, with an extraordinary new work of fiction. Mudwoman is a riveting psychological thriller, taut with dark suspense, that explores the high price of repression in the life of a respected university president teetering on the precipice of a nervous breakdown. Like Daphne DuMaurier’s gothic masterwork, Rebecca, and the classic ghost story, The Turn of the Screw, by Henry James, Oates’s Mudwoman is a chilling page-turner that hinges on the power of the imagination and the blurry lines between the real and the invented—and it stands tall among the author’s most powerful and beloved works, including The Falls, The Gravedigger’s Daughter, and We Were the Mulvaneys.

Joyce Carol Oates is a recipient of the National Medal of Humanities, the National Book Critics Circle Ivan Sandrof Lifetime Achievement Award, the National Book Award, and the PEN/Malamud Award for Excellence in Short Fiction, and has been several times nominated for the Pulitzer Prize. She has written some of the most enduring fiction of our time, including the national bestsellers We Were the Mulvaneys, Blonde, which was nominated for the National Book Award, and the New York Times bestseller The Falls, which won the 2005 Prix Femina. Her most recent novel is A Book of American Martyrs. She is the Roger S. Berlind Distinguished Professor of the Humanities at Princeton University and has been a member of the American Academy of Arts and Letters since 1978.