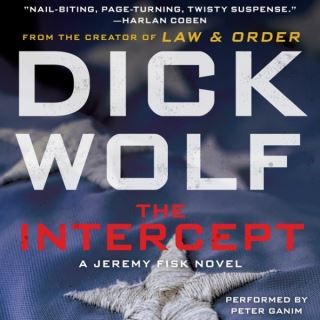 Dick Wolf, the celebrated creator of the Law & Order television franchise, makes his literary debut with The Intercept, a taut, driving thriller reminiscent of the classic The Day of the Jackal.

Days before the July Fourth holiday and the dedication of One World Trade Center at Ground Zero, an incident aboard a commercial jet reminds everyone involved that vigilance saves lives.

But New York Police detective Jeremy Fisk—from the department’s Intelligence Division, a well-funded anti-terror unit modeled upon the CIA—suspects that the event is a warning sign that another, potentially more extraordinary scheme has been set in motion. So when a passenger from the same plane disappears into the crowds of Manhattan, it’s up to Fisk and his partner Krina Gersten to find him before the celebrations begin... And time is running out.

Dick Wolf, a two-time Emmy award-winning writer, producer, and creator, is the architect of one of the most successful brands in the history of television—NBC's Law & Order, one of the longest-running scripted shows. Wolf is also the creator and executive producer of Chicago Fire and Chicago P.D. He has won numerous awards, including Emmys for Outstanding Drama Series (Law & Order) and Outstanding Made-for-Television Movie (Bury My Heart at Wounded Knee); a Grammy; and an Edgar. Wolf is the New York Times bestselling author of The Intercept and The Execution. The Ultimatum is the third book in his Jeremy Fisk series. He lives in Southern California.