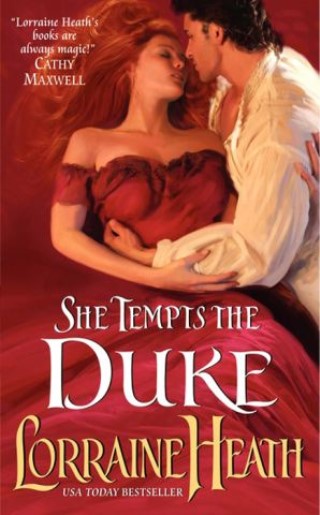 She Tempts the Duke

“Heath steals your heart, then takes you on a journey that will leave you torn between tears and joy.”
—Christina Dodd

New York Times bestselling author Lorraine Heath writes sweet temptations—richly, deliciously passionate, high concept historical romance in the vein of Lisa Kleypas and Liz Carlyle. With She Tempts the Duke, Heath kicks off another enthralling series, this time following the fortunes of the Lost Lords of Pembrook—three dark and dangerous noble brothers imprisoned and robbed of their inheritance, but free now and determined to reclaim their birthright. Set in England during Victoria’s reign, She Tempts the Duke is the enthrallingly romantic story of Sebastian, who fled to battle, and his return to London, a hardened soldier, drawn to the beautiful, brave lady who helped him and his brothers escape their captivity.