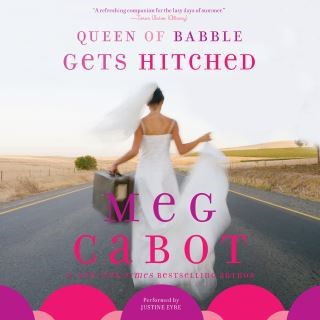 Queen of Babble Gets Hitched

It's the wedding of the century!

Things are looking up at last for Lizzie Nichols. She has a career she loves in the field of her choice (wedding gown restoration), and the love of her life, Jean-Luc, has finally proposed. Life's become a dizzying whirl of wedding gown fittings—not necessarily her own—as Lizzie prepares for her dream wedding at her fiancé's château in the south of France.

But the dream soon becomes a nightmare as the best man—whom Lizzie might once have accidentally slept with . . . no, really, just slept—announces his total lack of support for the couple, a sentiment the maid of honor happens to second; Lizzie's Midwestern family can't understand why she doesn't want to have her wedding in the family backyard; her future, oh-so-proper French in-laws seem to be slowly trying to lure the groom away from medical school and back into investment banking; and Lizzie finds herself wondering if her Prince Charming really is as charming as she once believed.

Is Lizzie really ready to embrace her new role as wife and mistress of Château Mirac? Or is she destined to fall into another man's arms . . . and into the trap of becoming a Bad Girl instead?

Meg Cabot’s many books for both adults and tweens/teens have included multiple global and #1 New York Times bestsellers, selling over twenty-five million copies worldwide. Her Princess Diaries series has been published in more than 38 countries and was made into several hit films by Disney. Meg is still waiting for her real parents, the king and queen, to restore her to her rightful throne. She currently lives in Key West, FL, with her husband and various cats.