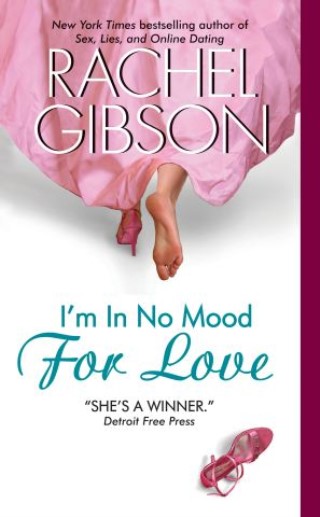 I'm In No Mood For Love

What is Clare Wingate doing? One minute she's suffering in a pretty-in-pink gown she'll never wear again, and the next thing she knows it's morning . . . and she has the nastiest hangover of her life.

To make matters worse, she's wearing nothing but a spritz of Escada and lying next to Sebastian Vaughan . . . her girlhood crush turned sexy, globe-hopping journalist. Somewhere between the toast and the toss of the bouquet she'd gotten herself into a whole lot of trouble.

Clare had the right to go wild—after all, she'd been knocked off her dyed-to-match shoes after finding her own fiancé in a compromising position with the washing machine repairman. Clearly her society wedding is off.

But Sebastian pushed all the wrong buttons—and some of the right ones, too. Clare is in no mood for love—not even for lust—and wants to forget about Sebastian and his six-pack abs ASAP. But he isn't in the mood to go away, and his kiss is impossible to forget.

Rachel Gibson began her fiction career at age sixteen, when she ran her car into the side of a hill, retrieved the bumper, and drove to a parking lot, where she strategically scattered the car’s broken glass all about. She told her parents she’d been the victim of a hit-and-run and they believed her. She’s been making up stories ever since, although she gets paid better for them nowadays.