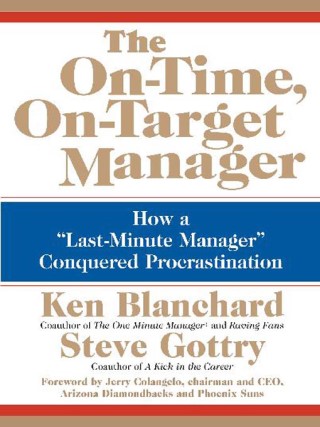 How a "Last-Minute Manager" Conquered Procrastination

Ken Blanchard's phenomenal bestsellers, such as The One Minute Manager and Raving Fans, have made him a globally recognized business legend. Millions look to Blanchard for innovative approaches to management, leadership, customer service, and much more. Now, he has joined with noted business author Steve Gottry to explore one of the most common and insidious problems plaguing the workplace—procrastination.

The On-Time, On-Target Manager is the story of Bob, a typical middle manager who puts things off to the last minute. As a result, he misses deadlines because his lack of focus causes him to accomplish meaningless tasks before getting to the important things. Like many professionals, Bob rationalizes, justifies, and tries to explain. Luckily, Bob is sent to his company's CEO—which stands for "Chief Effectiveness Officer"—who helps him deal with the three negative side effects of procrastination: lateness, poor work quality, and stress to himself and others. Bob learns how to transform himself from a crisis-prone Last-Minute manager into a productive On-Time, On-Target manager.

With this engaging parable, Blanchard and Gottry offer practical strategies any professional can put into practice to improve his or her performance.

Ken Blanchard, PhD, is one of the most influential leadership experts in the world. He has co-authored 60 books, including Raving Fans and Gung Ho! (with Sheldon Bowles). His groundbreaking works have been translated into over 40 languages and their combined sales total more than 21 million copies. In 2005 he was inducted into Amazon's Hall of Fame as one of the top 25 bestselling authors of all time. The recipient of numerous leadership awards and honors, he is cofounder with his wife, Margie, of The Ken Blanchard Companies®, a leading international training and consulting firm.

Steve Gottry is the owner of Priority Multimedia Group, Inc., a content creation company that develops films, videos, books, and marketing materials. Gottry and his firm have won a number of awards, including three Silver Microphones for radio and awards from the International Advertising Festival for direct mail and film. He lives in Phoenix, Arizona.