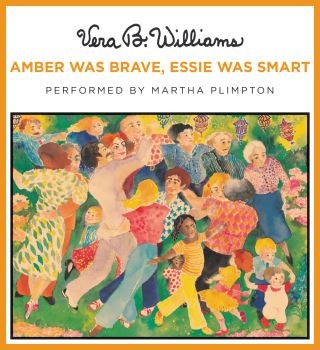 Amber Was Brave, Essie Was Smart

A funny book that makes you cry. A sad book that makes you laugh. A book about two sisters and their family that makes you wish you were part of it--and grateful that you are not. In short, this book is one surprise after another. The only thing that is not a surprise is that Vera B. Williams has created a wholly unforgettable, absolutely wonderful portrait of Amber, Essie, and their world. Open the book. You will never be the same again.

Vera B. Williams began her career in children’s books by illustrating Hooray for Me!, written by Remy Charlip with Lilian Moore. Her beloved A Chair for My Mother won multiple awards, including a Caldecott Honor, and “More, More, More,” Said the Baby also received a Caldecott Honor. Vera B. Williams was the recipient of the Jane Addams Children’s Book Award; she was awarded the 2009 NSK Neustadt Prize for Children’s Literature; and she was the US nominee for the Hans Christian Andersen Award in 2004. Vera B. Williams died on October 16, 2015, shortly before this book was completed.

Martha Plimpton has starred in the films The Goonies and 200 Cigarettes among numerous others. A strong supporter of the theater, she donates her time and efforts to the "52nd Street Project," a not-for-profit organization dedicated to matching inner-city children with professional theater artists to create original theater.