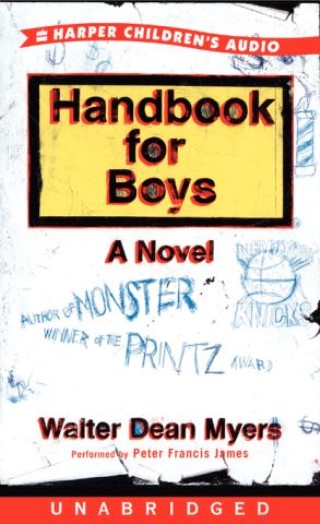 "What you need to do," Kevin said, "is publish a book called Rules for Every Thing."
"If I publish a book," Duke said, "I'm going to call it Handbook for Boys."

Growing up is tough...really tough.

At Duke's Place, Jimmy and Kevin find out that the handbook isn't written down. It means listening to Duke and his friends talk about their lives. But how can Duke, a senior citizen, understand what it is to be young now?

In the tradition of his award-winning book Monster, Walter Dean Myers once again breaks new ground with this extraordinary, original, and complex novel about learning to be a man.

Walter Dean Myers was the New York Times bestselling author of Monster, the winner of the first Michael L. Printz Award; a former National Ambassador for Young People's Literature; and an inaugural NYC Literary Honoree. Myers received every single major award in the field of children's literature. He was the author of two Newbery Honor Books and six Coretta Scott King Awardees. He was the recipient of the Margaret A. Edwards Award for lifetime achievement in writing for young adults, a three-time National Book Award Finalist, as well as the first-ever recipient of the Coretta Scott King-Virginia Hamilton Award for Lifetime Achievement.

Peter Francis James has starred in numerous Broadway and off-Broadway productions, as well as on such television programs as Law & Order: Special Victims Unit, New York Undercover and State of Affairs.