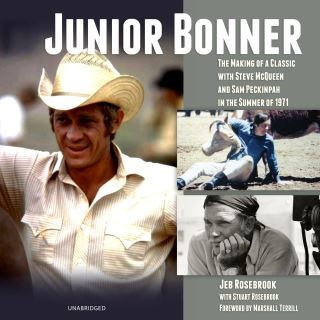 "Junior Bonner is Jeb Rosebrook's masterpiece, subtly understated and richly rewarding. In 1972, it provided director Sam Peckinpah with a unique opportunity to return to his roots and deliver a portrayal of the modern American West. In this wonderfully written memoir, Rosebrook captures the creative conflicts that are inevitable as words become images. It depicts a classic confrontation between a talented young screenwriter and tyrannical director whose personal visions merge to make a classic motion picture. A must-read for anyone interested in the reality behind great moviemaking."

-Garner Simmons, author of Peckinpah: A Portrait in Montage

Junior Bonner (1972) is the best rodeo film that's ever been made. It was the best script Sam ever got his hands on....Junior Bonner is truer to the human element behind the sport than any other rodeo film. It's Sam's one Western film where the protagonists survive the transition-at least for another day. The wreck might still be coming for Junior Bonner another mile or so down the road. That was the story of Sam, too."

-Max Evans, author of Goin' Crazy with Sam Peckinpah and All Our Friends

"Without the pressure of being commercially successful the film is one of McQueen's and Peckinpah's finest films, dealing with the human heart. The combination of deft performances, inspired writing and directing, and the authentic feel of the locations resulted in a rare experience., in the words of McQueen's next co-star Ali MacGraw, who proclaimed, "Such a beautiful, perfect film!"

Steve McQueen: The Actor and His Films

"Screenwriter Jeb Rosebrook's memoir about the making of the classic Steve McQueen film he penned, Junior Bonner, is infinitely more than a behind-the-scenes account of a great film. It's an inside-the-scenes account of a turning point in his own life, of a dangerous moment in the career of an aging movie star, of a transitional time when Hollywood briefly emulated the artistic ambitions and creative reach of European cinema. The cast of characters includes such flammable figures as McQueen and legendary director auteur-terrible Sam Peckinpah and assorted agents, producers, and 1970s studio executives who were presiding over Hollywood's greatest explosion of audacious, boundary-breaking filmmaking since its founding. And Rosebrook's memoir goes deeper, into the hearts and minds of these dreamers and schemers on both sides of the camera who, almost in spite of themselves, their egos, and their appetites, managed to make lasting film art that's worth analyzing and celebrating all these decades later."

"For decades Jeb Rosebrook entertained audiences with films, television shows and novels. Now, his behind-the-scenes memoir of the production of the movie Junior Bonner, which he scripted, spotlights how filmmaking is an intensely collaborative art. Plus, we get all the skinny, and the fat, of behind the scenes shenanigans, sexual dalliances, and Steve McQueen's resilience and acting strength against Peckinpah's iron-fisted directing. Junior Bonner, starring Steve McQueen, Ida Lupino and Robert Preston, evolved through Rosebrook's inspiring creativity and diligent collaboration with the actors-and director Peckinpah always threatening to send home anyone, cast, or crew, with a tin can strapped to their butt. Through it all, Rosebrook's script survived to create a classic and memorable film-one of the top 100 Westerns."