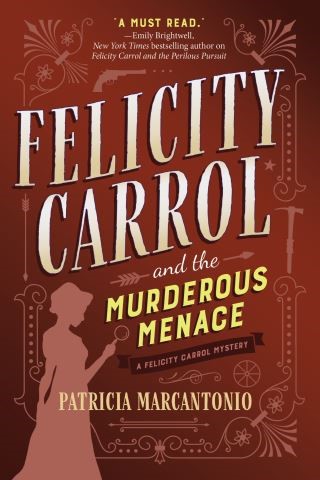 Felicity Carrol and the Murderous Menace

Heiress and amateur detective Felicity Carrol makes a perilous journey to apprehend a notorious murderer who has terrorized England--and now continues his vicious killing spree across the pond.

Felicity Carrol would rather be doing just about anything other than attending balls or seeking a husband. What she really wants to do is continue her work using the latest forensic methods and her photographic memory to help London police bring murderers to justice, so when her friend, Scotland Yard Inspector Jackson Davies, weak from injury, discovers a murder in a wild mining town in Montana that echoes the terrible crimes in England, Felicity decides to go herself.

In Placer, Montana, her first obstacle is handsome lawman Thomas Pike, who uses his intuition as much as his Colt in keeping law and order in this unruly town. When the murderer strikes again, Felicity begins to suspect Davies is correct: Jack the Ripper has come to America. Felicity sets out to find the killer in a town chock full of secrets, shadows, and suspects, but as the body count rises, this intrepid sleuth faces her most dangerous adversary yet--and discovers that not all killers are as they seem.

Patricia Marcantonio: Patricia Santos Marcantonio was born in Pueblo, Colorado. She has won awards for her journalism, short stories and screenplays.
"Red Ridin' in the Hood and Other Cuentos" has earned an Anne Izard Storyteller's Choice Award; and was named an Americas Award for Children's and Young Adult Literature Commended Title, and one of the Wilde Awards Best Collections to Share; with recommendations from Bulletin of the Center for Children's Books.