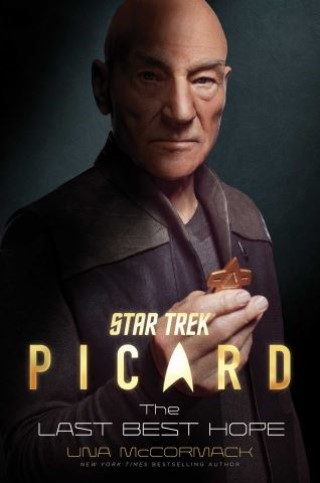 An original novel based on the new Star Trek TV series!

A thrilling novel leading into the new CBS series, Una McCormack’s The Last Best Hope introduces you to brand new characters featured in the life of beloved Star Trek captain Jean-Luc Picard—widely considered to be one of the most popular and recognizable characters in all of science fiction.

Una McCormack: Una McCormack is the author of seven previous Star Trek novels: The Lotus Flower (part of The Worlds of Star Trek: Deep Space Nine), Hollow Men, The Never-Ending Sacrifice, Brinkmanship, The Missing, the New York Times bestseller The Fall: The Crimson Shadow, and Enigma Tales. She is also the author of three Doctor Who novels from BBC Books: The King’s Dragon, The Way Through the Woods, and Royal Blood. She has written numerous short stories and audio dramas. She lives in Cambridge, England, with her partner of many years, Matthew, and their daughter, Verity.