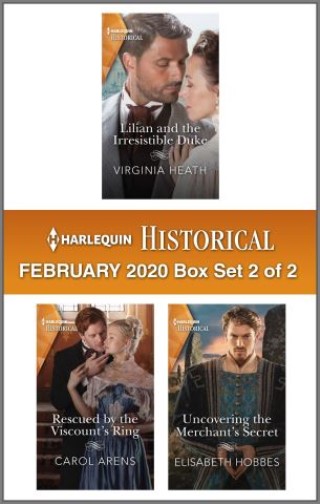 Do you dream of wicked rakes, gorgeous Highlanders and muscled Viking warriors? Harlequin® Historical brings you three new full-length titles in one collection!

Responsible widow Lilian Fairclough has an unexpected and passionate reunion with brooding Italian duke Pietro Venturi in Rome. But what will happen once she returns home?

RESCUED BY THE VISCOUNT’S RING
by Carol Arens
(Victorian)

To save her reputation, American heiress Madeline Macooish must marry Rees Dalton—temporarily. But just as she decides on forever, she discovers his secret…

UNCOVERING THE MERCHANT’S SECRET
by Elisabeth Hobbes
(Medieval)
Shipwrecked Jack Langdon has no memory except of a kiss from beautiful stranger Blanche Tanet. They must uncover the secrets of his past if they’re to have a future.

Virginia Heath: When Virginia Heath was a little girl it took her ages to fall asleep, so she made up stories in her head to help pass the time while she was staring at the ceiling. As she got older, the stories became more complicated, sometimes taking weeks to get to the happy ending. Then one day, she decided to embrace the insomnia and start writing them down. But it still takes her ages to fall asleep.Carol lives with her real life hero and husband, Rick, in Southern California where she was born and raised. She joined Romance Writers of America where she met generous authors who taught her the craft of writing a romance novel. With the knowledge she gained, she sold her first book and saw her life-long dream come true. She enjoys hearing from readers and invites you to contact her at carolsarens@yahoo.comElisabeth’s writing career began when she finished third in Harlequin’s So You Think You Can Write contest in 2013 and hasn't looked back. She teaches Primary school but would rather write full time because unlike five year olds her characters generally do what she tells them. She spends most of her spare time reading and is a pro at cooking one-handed while holding a book.

She lives in Cheshire because the car broke down there in 1999 and she never left.