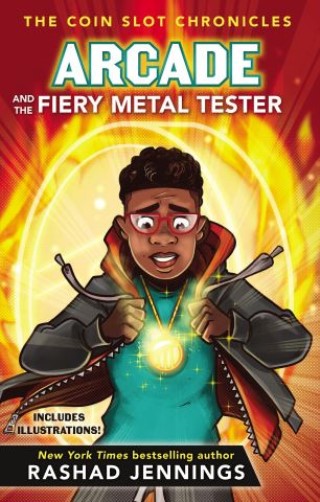 Arcade and the Fiery Metal Tester

In Arcade and the Fiery Metal Tester, New York City is experiencing the hottest summer on record. Eleven-year-old Arcade Livingston can’t keep his cool after receiving this suspicious warning atop the Empire State Building: “Things will heat up in all areas to test your mettle.”

In no time flat, Arcade is tested like never before to use the Triple T token’s powerful ways to outsmart a bully, find a place for his best friend to live, and spy on some pesky villains from the 1900s. Meanwhile, sister Zoe thinks controlling the token is nothing but a path to disaster.

One thing’s for sure, the token continues its flashing and pulsing. And elevator doors continue to transport Arcade, Zoe, and their friends to meet different people in strange locations—people who will challenge them, teach them, and inspire them to grow in patience and compassion.

And just as a trip through a fiery furnace is necessary to purify gold, the token leads Arcade through superheated situations to test the purity of his heart.

Read as part of the series or as a stand-alone novel! Arcade and the Fiery Metal Tester is the third book in the humorous and imaginative Coin Slot Chronicles series by New York Times bestselling author, former NFL running back, and Dancing with the Stars champion Rashad Jennings.

New York Times bestselling author and retired NFL running back Rashad Jennings is an impactful influencer, inspirational speaker, and nationally recognized personality. Throughout his successful eight-year career in the NFL, as well as during his championship-winning Season 24 Dancing with the Stars, Rashad gained the love and support of fans throughout the country. Today, Rashad is driven to make a national impact and lasting legacy through The Rashad Jennings Foundation, established in 2013. This award-winning foundation is dedicated to inspiring youth through the foundation’s Flagship Literacy program which is currently successfully implemented in 12 of the 32 NFL cities, in addition to providing mentorship and promoting health and fitness nationwide. Rashad has also authored The If In Life: How to Get Off Life’s Sidelines and Become Your Best Self. Follow Rashad on Twitter, Instagram, Snapchat, and Facebook.