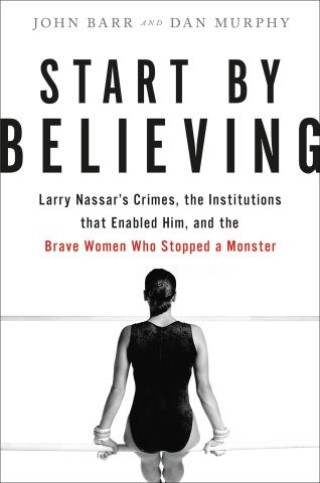 Larry Nassar's Crimes, the Institutions that Enabled Him, and the Brave Women Who Stopped a Monster

The definitive, devastating account of the largest sex abuse scandal in American sports history-with new details and insights into the institutional failures, as well as the bravery that brought it to light.
For decades, osteopathic physician Larry Nassar built a sterling reputation as the go-to doctor for America's Olympians while treating countless others at his office on Michigan State University's campus. It was largely within the high-pressure world of competitive gymnastics that Nassar exploited young girls, who were otherwise motivated by fear and intimidation, sexually assaulting hundreds of them under the guise of medical treatment.

In Start by Believing, John Barr and Dan Murphy confront Nassar's acts, which represent the largest sex abuse scandal to impact the sporting world. Through never-before-released interviews and documents they deconstruct the epic institutional failures and individuals who enabled him. When warnings were raised, self-serving leaders chose to protect their organizations' reputations over the well-being of young people.

Following the paths traveled by courageous women-featuring a once-shy Christian attorney and a brash, outspoken Olympic medalist-Barr and Murphy detail the stories of those who fought back against the dysfunction within their sport to claim a far-from-inevitable victory. The gymnasts' uncommon perseverance, along with the help of dedicated advocates brought criminals to justice and helped to fuel the #MeToo revolution.

Start by Believing reveals the win-at-all-costs culture in elite athletics and higher education that enabled a quarter century of heinous crimes.