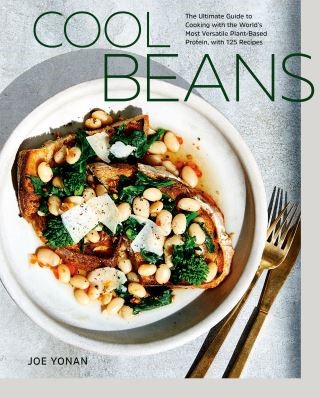 The Ultimate Guide to Cooking with the World's Most Versatile Plant-Based Protein, with 125 Recipes [A Cookbook]

Beans are emerging from their hippie roots to be embraced for what they truly are: a delicious, versatile, and environmentally friendly form of protein. With heirloom varieties now widely available across the United States, this nutritious and hearty staple is poised to take over your diet.

Enter Joe Yonan, food editor of The Washington Post, who provides a master base recipe for cooking any sort of bean in any sort of appliance--Instant Pot®, slow cooker, or stovetop--as well as 125 recipes for using them in daily life, from Harissa-Roasted Carrot and White Bean Dip to Crunchy Spiced Chickpeas to Smoky Black Bean and Plantain Chili. Drawing on the culinary traditions of the Middle East, the Mediterranean, South America, and the American South, and with beautiful photography throughout, this book has recipes for everyone. With fresh flavors, vibrant spices, and clever techniques, Yonan shows how beans can save you from boring dinners, lunches, breakfasts--and even desserts!

Joe Yonan: Joe Yonan is the two-time James Beard Award-winning food and dining editor of The Washington Post. He is the author of Eat Your Vegetables, which was named among the best cookbooks of 2013 by The Atlantic, The Boston Globe, and NPR's Here and Now, and Serve Yourself, which Serious Eats, David Lebovitz, and the San Francisco Chronicle named to their best-of-the-year lists. Joe was a food writer and travel section editor at The Boston Globe before moving to Washington in 2006 to edit the Post's food section. He writes the Post's "Weeknight Vegetarian" column and for five years wrote the "Cooking for One" column, both of which have won honors from the Association of Food Journalists.