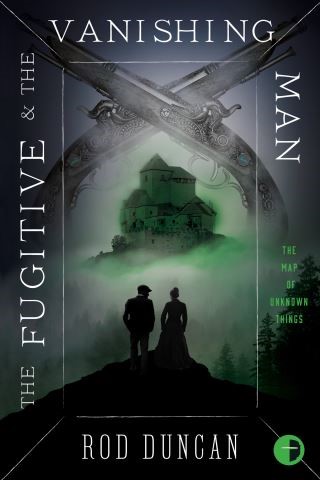 The Fugitive and the Vanishing Man

Book III of The Map of Unknown Things

Ladies and gentlemen, for the very final time, Elizabeth and Edwin Barnabus will perform the grand illusion of the Vanishing Man.

Elizabeth Barnabus is a mutineer and a murderer. So they say. The noose awaits in Liverpool as punishment for her crimes. But they’ll have to catch her first.

Disguised as a labourer, Elizabeth flees west across America, following a rumour of her long-lost family. Crossing the border into the wilds of the Oregon Territory, she discovers a mustering army, a king who believes he is destined to conquer the world, and a weapon so powerful that it could bring the age of reason crashing down.

In a land where politics and prophecy are one and the same, the fate of the Gas-Lit Empire may come to rest on the perfect execution of a conjuring trick…

Rod Duncan: ROD DUNCAN writes alternate history, fantasy and contemporary crime. His novels have been shortlisted for the Philip K Dick Award, the East Midlands Book Award and the John Creasey Dagger of the Crime Writers' Association. A dyslexic with a background in scientific research, he now lectures in creative writing at DeMontfort University. Some might say that he is obsessed with boundary markers, naive 18th Century gravestones and forming friendships with crows. But he says he is interested in the way things change.