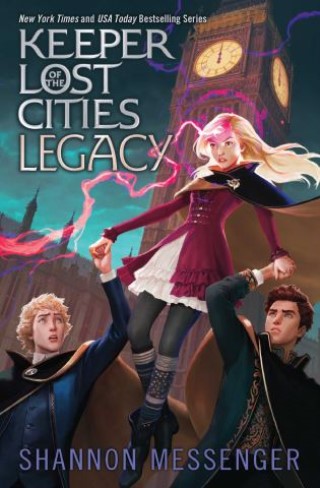 Sophie Foster wants answers. But after a lifetime of lies, sometimes the truth is the most dangerous discovery. Even the smallest secret comes with terrifying new responsibilities.

And Sophie’s not the only one with blank spots in her past, or mysteries surrounding her family. She and her friends are part of something much bigger than they imagined—and their roles have already been chosen for them.

Every clue drags them deeper into the conspiracy. Every memory forces them to question everything—especially one another. And the harder they fight, the more the lines blur between friend and enemy.

Shannon Messenger: Shannon Messenger graduated from the USC School of Cinematic Arts, where she learned—among other things—that she liked watching movies much better than making them. She’s studied art, screenwriting, and film production, but she realized her real passion was writing stories for children. She’s the New York Times and USA TODAY bestselling author of the award-winning middle grade series, Keeper of the Lost Cities, as well as the Sky Fall series for young adults. Her books have been featured on multiple state reading lists, published in numerous countries, and translated into many different languages. She lives in Southern California with an embarrassing number of cats. Find her online at ShannonMessenger.com.